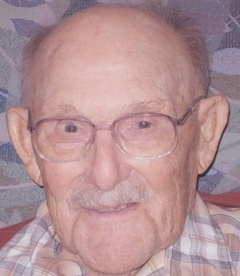 Richard "Brickie" Snyder, 92, of Annville, died on Tuesday, January 27, 2015 at Lebanon Valley Home.
He was born on Monday, June 05, 1922 to the late Robert Snyder and Bessie Snyder nee Weaver in Lebanon.  He was a member of Holy Trinity Evangelical Lutheran Church and was a veteran of the Army Air Corps in World War II.
He was a General Foreman at Cornwall Concentration Plant and retired from Bethlehem Steel. Richard was proud to be a part of the Lebanon High School 1940 State Basketball Champions. He enjoyed hunting and fishing.
Surviving are son Richard B. spouse of Ellen Snyder, Folsom; daughter Kathy J. spouse of Edward Dannels, Lebanon; 5 grandchildren; 3 great grandchildren; son-in-law Alfred Morgan, Hellertown.  He was preceded in death by wife Kathryn S. Snyder nee Bender; daughter Robin L. Morgan.
Viewing will be on Monday, February 02, 2015 from 10:00 AM to 11:00 AM at Christman's Funeral Home, Inc., 226 Cumberland Street, Lebanon.
Funeral services will be on Monday, February 02, 2015 at 11:00 AM at the funeral home.
Burial will be at Indiantown Gap National Cemetery, Annville, with full military honors, following the service.
Memorial contributions may be made to Wounded Warrior Project, PO Box 758517, Topeka, KS 66675.
For more information, to order flowers, or to send messages of condolence, please visit
www.christmansfuneralhome.com

To order memorial trees or send flowers to the family in memory of Richard Snyder, please visit our flower store.