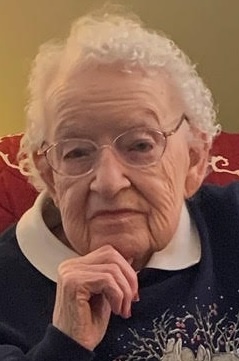 Olive M. Galbraith, 96, of Lebanon passed away July 17, 2020 at Carolyn's House Hospice in Harrisburg.
She was born August 23, 1923 in Lebanon to the late Eva and Oliver Eisenhauer. She was preceded in death by her husband, Yale to whom she was married for 68 years. She was also preceded in death by a son Barry and her brother John Eisenhauer. Olive was a 1941 graduate of Lebanon High School, where the yearbook listed her nickname as "Jolly Ollie." This is an accurate description of how she lived her life. Her sense of humor was refreshing and her presence and personality enriched everyone around her. She was kind, loving and generous to a fault, as she always attended to everyone before herself.
She was a loving wife, homemaker and wonderful mother to her 3 sons, Barry, Gene and Scott. When the boys were grown, she began work as a Library Aide for the Lebanon School District at Southeast Elementary School where she was joyfully employed for 24 years before her retirement in 1994. She often spoke of the fond memories and experiences with the children and staff at the school.Ollie was also a lifelong member of Salem Lutheran Church, where she was an active volunteer with the Women of Salem. She was a great cook and baker and her coconut cake was held in high regard.
Besides her sons, she is survived by four grandchildren, Jody, Greg, Joshua and Christopher as well as 7 great grandchildren and 5 great great grandchildren.
Services will be at the convenience of the family.
Memorial contributions may be made to Salem Evangelical Lutheran Church, 119 N. 8th Street, Lebanon, PA 17046.
For more information, to order flowers, or to send messages of condolence, please visit www.christmansfuneralhome.com

To order memorial trees or send flowers to the family in memory of Olive Galbraith, please visit our flower store.