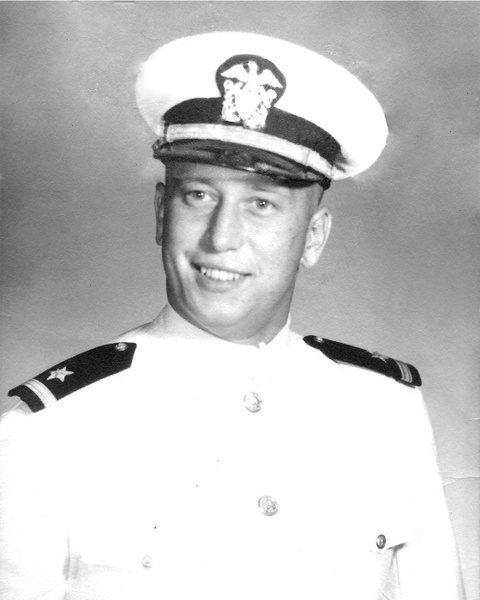 Harry Russell Trout, Jr., age 78, longtime resident of Newbury, died unexpectedly on Sunday, November 11, 2018 (Veteran’s Day), at his home on Plum Island, where so many beautiful memories had been shared with family and friends.
Born in Lebanon, Pennsylvania on January 6, 1940, he was the son of the late Harry R. and Myrle E. (Brandt) Trout. Harry was a graduate of Lebanon High School, class of 1957. He went on to receive a Bachelor¹s Degree in business from the University of Tampa. Harry was proud to have served as an officer with the U.S. Navy and graduated from the U.S. Naval Academy in 1963. He served until 1972 and was a Lieutenant Commander for the USS Claud Jones Destroyer.He moved to Westford, MA in 1971 to raise his family and began a successful career in the packaging industry. Harry worked at Interstate Container before taking on the role of President and CEO at Bicknell and Fuller, in Peabody, a position he held for 35 years. He enjoyed his membership of 35 years at the Salem Country Club. He served 20 years on the Board of Directors of Pioneering Package, Inc. in Chicopee and 14 years on the Board of Directors of Turning Point, a nonprofit in Newburyport. He was a lifelong member of both the NRA and the Destroyer Escort Sailors Association. He was an avid coin and stamp collector. Harry was a very faith filled man. He also had a great love of sports. Harry was a 3-year letterman at Lebanon High School for Football, Basketball and Track. He went on to play football at Lebanon Valley College. His greatest joy was becoming a Grandpa, following the accomplishments of all his grandchildren and being their greatest supporter. His life’s legacy
will continue to live in the hearts of those who loved him so dearly; his daughter Lisa Cavallaro and husband Jim of North Andover, his sons Harry Trout, III and wife Maureen of Bradford and Hampton Trout and wife Laurie of West Newbury; his twelve grandchildren, Joseph, Evan, Carmen, Nolan, Rachel, Maria, Harry IV, Ella, Hampton Jr., Cooper, Morgan and Sydney; his sister, Diana Cline of Harrisburg, PA, along with his nieces, nephews, extended family and dear friends from near and far. In addition to his parents, he was predeceased by his beloved wife of 34 years, Mary C. (Santa Cruz) Trout, who died in 1997.
Funeral services and burial in the Ebenezer Greenwood Cemetery will take place in his beloved Hometown of Lebanon, Pennsylvania, in the care of Christman¹s Funeral Home, 226 Cumberland Street, Lebanon. In lieu of flowers, donations in his memory may be made to the Plum Island Foundation, Inc., P.O. Box 226, Newburyport, MA 01950 or Turning Point, Inc., 5 Perry Way, Newburyport, MA 01950. Local arrangements are by Elliott, Woodworth & Rogers Family Funeral Home, 35 Green Street, Newburyport.
For more information, to order flowers, or to send messages of condolence, please visit www.christmansfuneralhome.com

To order memorial trees or send flowers to the family in memory of Harry Trout, Jr., please visit our flower store.