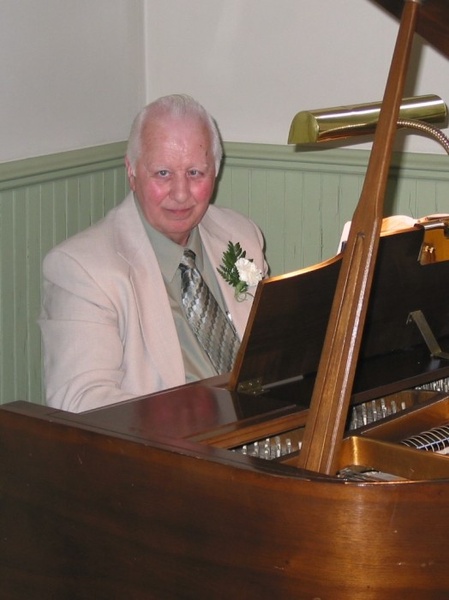 Harold T. Wagner, Jr., 84, of Lebanon, went home to be with the Lord on Wednesday, June 13, 2018 at Cedar Haven Healthcare Center in Lebanon.
He was the husband of Eunice E. (Walter) Wagner with whom he shared 63 years of marriage. Born in Myerstown, PA on March 19, 1934, he was the son of the late Harold and Pearl (Stamm) Wagner. Harold graduated from South Lebanon High School in 1952. After graduation he worked at Textile Printing and Winston Prints in Lebanon and then, for many years provided home delivery service for Fink's Bakery, Capitol Bakers and Wengert's Dairy. Following those years he worked for the Union Canal Gas Station operated by Wilhelm Supply and retired in 2010, after delivering parts for Ebersole Auto, Lebanon for nearly 27 years. He first began to play the piano at five years of age and this became a life-long joy and passion.  Over the years Harold played the piano in numerous churches, especially serving the congregations that met in Hokes Meeting House and the Lebanon Wesleyan Church.  He particularly enjoyed Southern Gospel music and traveled as a pianist with the Gloria Singers, the Minutemen, the Centurions, the Kintzel Brothers, the Jacob Family Singers, and the KW Singers.  He recently said, "I did it all for the Lord!" Harold also enjoyed watching Andy Griffith shows, Leave it to Beaver and Dick Van Dyke. In addition to his wife, Harold is survived by two sons; Dennison G. Wagner and wife Fabiola, Lebanon, PA; Daniel D. Wagner and wife Dana, Coatesville, PA; grandchildren Lori Rushworth, Kevin Taylor, Ryan Taylor, Michael Taylor, Benjamin Wagner, Matthew Wagner, John Wagner, Mark Wagner, Matias Silva-Sobarzo; 9 great grandchildren; sisters Ethel Kreider, Fay spouse of Clyde Klopp, Rhoda Moyer, Eunice Light; brothers Philip Wagner, Stephen spouse of Karen Wagner; numerous nieces and nephews. He was preceded in death by his brother, Luke Wagner; his parents; and a grandson, Daniel D. Wagner, Jr.
Viewing will be on Monday, June 18, 2018 from 9:30 AM to 11:00 AM at Lebanon Wesleyan Church, 3rd & Walnut Streets, Lebanon.
Funeral services will be on Monday, June 18, 2018 at 11:00 AM at the church.
Burial will be at Zion United Methodist Cemetery, Myerstown, following the service.
In lieu of flowers, memorial contributions may be made in Harold's memory to Lebanon Wesleyan Church, 309 Walnut Street, Lebanon, PA 17042.
For more information, to order flowers, or to send messages of condolence, please visit www.christmansfuneralhome.com

To order memorial trees or send flowers to the family in memory of Harold Wagner, Jr., please visit our flower store.