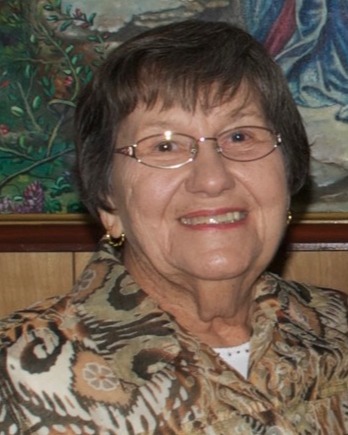 Esther P. Myrick, 90, passed on Thursday, December 29, 2022, at Spang Crest in Lebanon. She was born on May 3, 1932 to the late Samuel Blimline and Elsie B. (Fritz) Blimline at home in Cedar Top, PA. She was happily married to Harry E. Myrick, Sr. for nearly 64 years, until his passing in 2017. She was a retired houseparent for Milton Hershey School and previously attended Faith Baptist Church. Esther was a graduate of Mohnton High School in 1951 and enjoyed cleaning…seriously, she REALLY liked to clean and do laundry. Her home was spotless! That was her main hobby, but she also enjoyed collecting elephants - ceramic, stuffed, jewelry, you name it. She even had a designated “elephant room” in her home. Surviving Esther are children Debra L. Gesler (married to Lawrence Gesler) of Walla Walla, WA, Harry E. Myrick, Jr. (married to Elizabeth) of Paradise, PA and Lori L. Manley (married to Mark Manley) of Myerstown, PA; grandchildren and great grandchildren. She was preceded in death by her son Karl E. Myrick in 2019 as well as her three siblings, Curtis Blimline, Warren Blimline, and Arlene (Blimline) Steffy. Private viewing will be on Thursday, January 5, 2023 at Christman's Funeral Home, Inc., 226 Cumberland Street, Lebanon. Gravesite service will follow at Ft Indiantown Gap National Cemetery, Annville. We will all miss her smiling face and laughter, but know that we will meet again in Heaven through our faith in Jesus Christ.

To order memorial trees or send flowers to the family in memory of Esther P. Myrick, please visit our flower store.