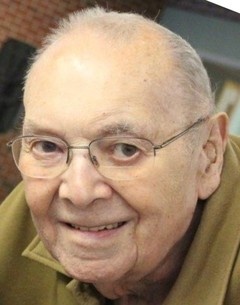 Charles A. "Charlie" Fenner, Jr., 92, of Lebanon, died on Wednesday, June 10, 2015 at his home.
He was born on Wednesday, October 04, 1922 to the late Charles A. Fenner, Sr. and Alice M. Fenner nee Wolf in Lebanon.  He was a member of Holy Trinity Evangelical Lutheran Church and was a veteran of the Navy MineSweeper in World War II.  He was a 1940 graduate of Lebanon High School and was married on for 66 years. Charlie was a PBX Repairman with Bell of PA and retired in 1982.  He was a member of Bell Pioneers and Friendship Fire Company.  He was a lifetime member of F.O.P., Charter member of WWII Memorial and a member of Bell Telephone Retiree Assoc. Charlie enjoyed computers and his son's say deleting files.
Surviving are wife Ernestine A. Fenner nee Booth; sons Larry A. Fenner, Lebanon, Allen spouse of Linda Fenner, FL; grandchildren Bradley Fenner, Kevin Fenner; great grandchildren Colin Fenner, Cora Fenner; brother Richard spouse of Florence Fenner; several nieces and nephews.
Viewing will be on Monday, June 15, 2015 from 10:00 AM to 11:00 AM at Christman's Funeral Home, Inc., 226 Cumberland Street, Lebanon.
Funeral services will be on Monday, June 15, 2015 at 11:00 AM at the funeral home.
Burial will be at Grand View Memorial Park, Annville, with full military honors following the service.
Memorial contributions may be made to Holy Trinity Evangelical Lutheran Church, 723 Lehman Street, Lebanon, PA 17046.
For more information, to order flowers, or to send messages of condolence, please visit www.christmansfuneralhome.com

To order memorial trees or send flowers to the family in memory of Charles Fenner, Jr., please visit our flower store.