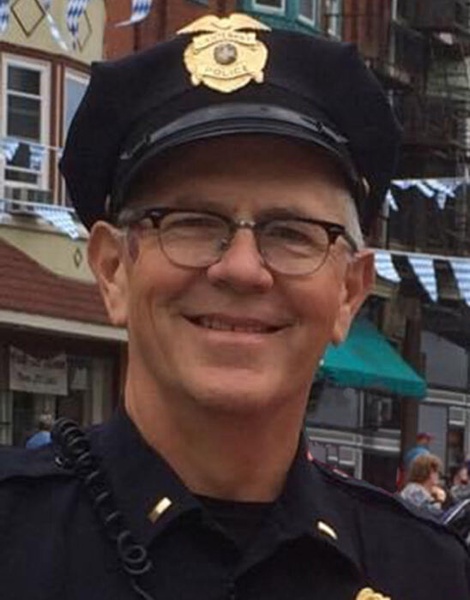 William Lebo’s end of watch occurred on Thursday evening, March 31, 2022. He is survived by his wife, Lora, his daughter, Corinne, and his mother, Rina, as well as his brothers, Richard Lebo and his wife Denise, and Jerry Lebo and his wife Colleen, and three nephews, their spouses and children. He is predeceased by his father, Sterling Lebo and his sister, Patricia Lebo. All of the family resides in Lebanon County. He is also survived by his wife’s loving family, the Reverend Dr. Jeffery Seeley and Dale Seeley, Anne and Thomas Beattie, Paula and James Kopcho, their children and grandchildren, who all adored him. William was born in Vicenza, Italy to Sterling (Bud) and Onorina, coming to the United States when Sterling, serving in the United States Army, returned home. He resided in Lebanon County for the rest of his life. He began his service to the City of Lebanon Police Department in September of 1982, and would have retired effective May 1. William was promoted to Sergeant in 2002, and shortly thereafter, prior to his swearing in, he was injured in the line of duty, breaking both legs. He was later promoted to Lieutenant, and spent the last 10 years managing the patrol platoons. William and Lora were married in 2009, and spent the past 14 years traveling, golfing, and holding every minute of life as precious. He never met an IPA he didn’t like, was a member of the Antique Automobile Club Association, and loved to tinker with cars and all modes of transportation. He never hesitated to pick up a check, always saying, “Don’t give it a second thought.” Even though it was not obvious, he was hysterically funny. Everyone who loves him will have a hole in their heart forever. A Celebration of William’s life will be held at the Giant Center in Hershey, PA at 11 AM on Friday, April 8, 2022. In lieu of flowers, donations may be made to C.O.P.S., 59 Ruppert Road, East Berlin, PA 17316 or the Elks Foundation, 2750 N. Lakeview Ave., Chicago, IL 60614. For more information, to order flowers, or to send messages of condolence, please visit www.christmansfuneralhome.com

To order memorial trees or send flowers to the family in memory of Lt. William Lebo, please visit our flower store.